Here’s a familiar picture for a Saturday brunch: You sit down to an assigned waiter that scurries off with your drink order before you can follow up with your food request. Fifteen minutes later you make your claim to Eggs Benedict but forget the side of muffins you’d wanted to add. You flag down the nearest waiter who, instead of punching in your order, says he’ll find your assigned waiter to help you. Then once you’ve eaten, you tap your fingers for ten minutes until your waiter notices you again and brings the bill.

Not in one special establishment. There is a place where the waiters, servers and buss boys all tag team seamlessly, and with their powers combined, they are Westville! What inspired Westville to be different and, in fact, much more efficient and service-oriented than the average restaurant? My theory is fairness. 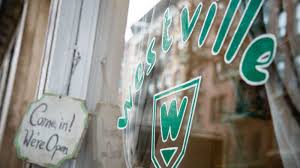 Many of you may not be aware of the crazy NY rule that precludes tip sharing with the cook staff. What Westville seems to have done is take tip pooling to the next level and leverage a clever loophole in the policy by making the cook staff also the bussers. So your food comes out super snappy, and the back of house doesn’t get shafted on pay. And since all the tips are pooled, waiters are motivated to help you quickly to maximize client flow rather than their individual tip at a given table. This model is perfect for mildly impatient New Yorkers!

NY is by no means unique in its bias against kitchen staff. And many Americans have unfortunately been conditioned to think in fuzzy accounting terms and, thus, to prefer a tipping system that fools them into buying based on sticker prices rather than final prices. But other restauranteurs, like the famed Danny Meyer, have made a smashing success of no tipping: his flagship no-tipping restaurant The Modern has been flooded with both diners and staff applications since the pronouncement, and the rollout is scheduled to continue across his various hospitality locations. You can’t put a price on a genuinely friendly waiter interaction, not fueled by hopes of remuneration.