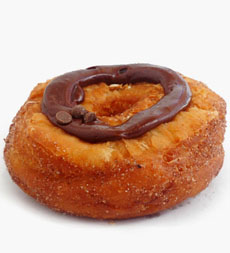 Being (admittedly) one step behind the foodie trend, I was mightily pleased when I came across an Upper West Side food fair with a bold banner announcing “CRONUTS”, the flakey croissant-like donuts that somehow seem to come up in every weekend conversation with my hard-core foodie friends.

I picked out a juicy Nutella and creamy coconut pair and glanced at the name “Jolie’s” in small print in the corner of the banner, not thinking much of it…only to learn upon presenting my +1 with his trophy donut that I’d been duped by a copy cat! Well, I was still really excited to eat the donut, so I actually didn’t feel that bad. But I was certain that such a catchy name had to be trade marked, lest other chefs take advantage of the hard won innovation. While Wikipedia says “yes”, the NYC bakery market says, “You think a patent and trade-mark can stop us?” While no big players have been so brazen as to steal the exact name, nothing else is sacred. Yes, D&D is in on the action.

So how does that make all the entrepreneurs feel about where their blood, sweat and tears are going? Eh, it’s par for the course really. Did you hear about the lady that invented these now ubiquitous spinners? That’s right, no, because Chinese-built knock-offs flooded the market once her patent expired. In the land where IP is thought to be sacred, you may not always be much better off. But on the upside, for us consumers, more donuts of 80% the quality!