Hello beautiful nerds, this week in MBA in the City, we explore the design choices of NYC’s above ground public infrastructure that have helped the flow of the city. Yes, I’m talking about how the city has made way for the explosion of bicycles.

In the last decade, the number of daily bike trips in the city has more than doubled. And from the ever-expanding bike lane network to the ever-available bike racks throughout the city, our movement has become a little more perfect. And how has New York achieved this visible transformation? Using the mightiest of modern weapons: data. With New York’s Open Data policy and numerous beta tests and A/B tests, it’s clear our policy makers aren’t afraid of data. And New Yorkers aren’t shy about sharing opinions. This match made in heaven has produced decisions by and for the city’s 8 million residents. Respect.

Now for the highlights real! The back stories and photo documentary of where we’ve arrived by bike.

Bike racks can be beautiful

A decade ago the City launched an international competition to design the next generation bike rack. The results ranged from elegant to intriguing, producing a series of sample designs that were sprinkled throughout the city. Public comments read like Amazon reviews:

Most free opinions are worth their actual weight, but ones from New Yorkers make me feel like I’m watching reality TV: inexplicably mesmerized.

Once the winner was selected, these racks rolled out across the city, with some interesting auxiliary effects. 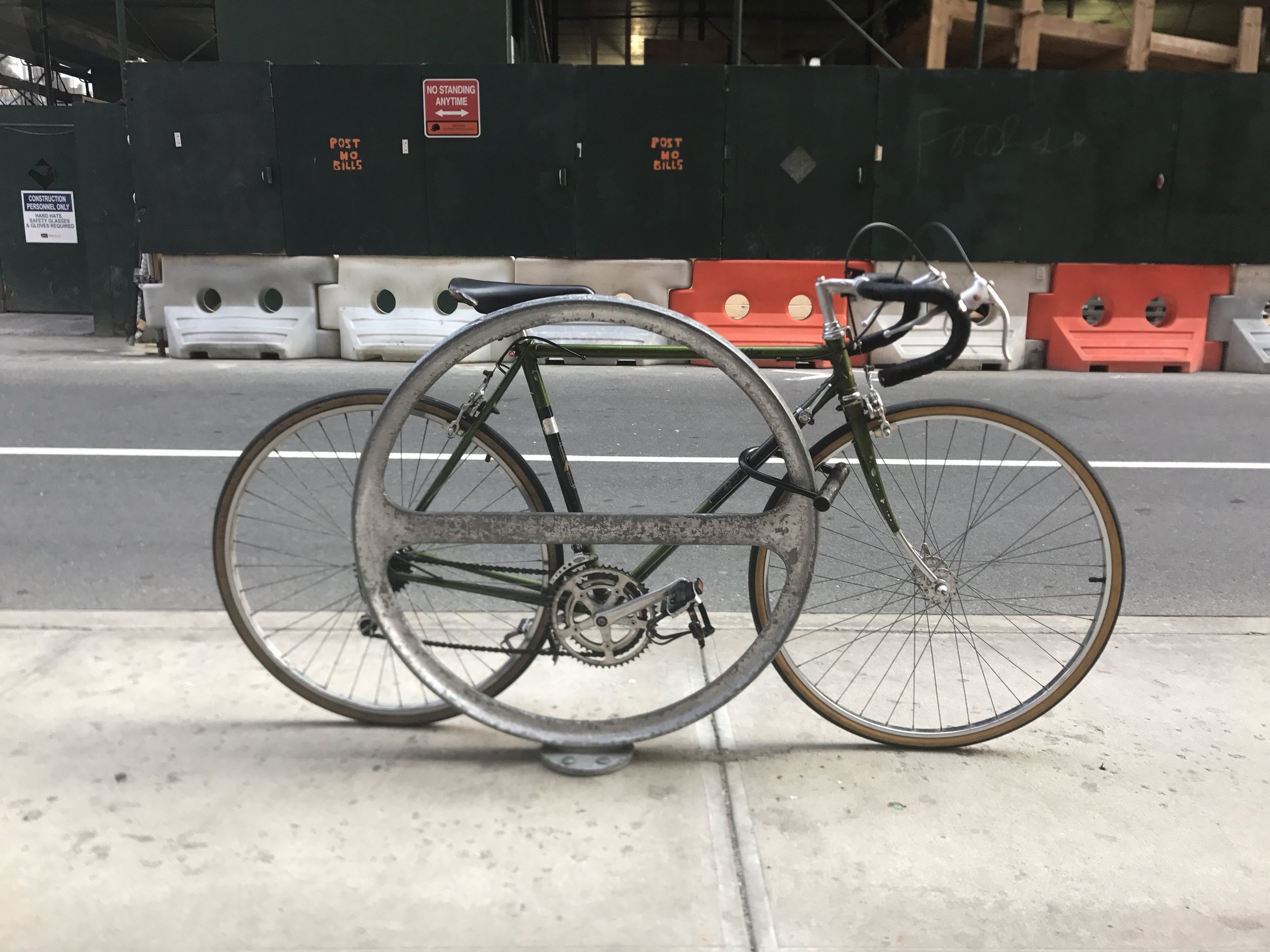 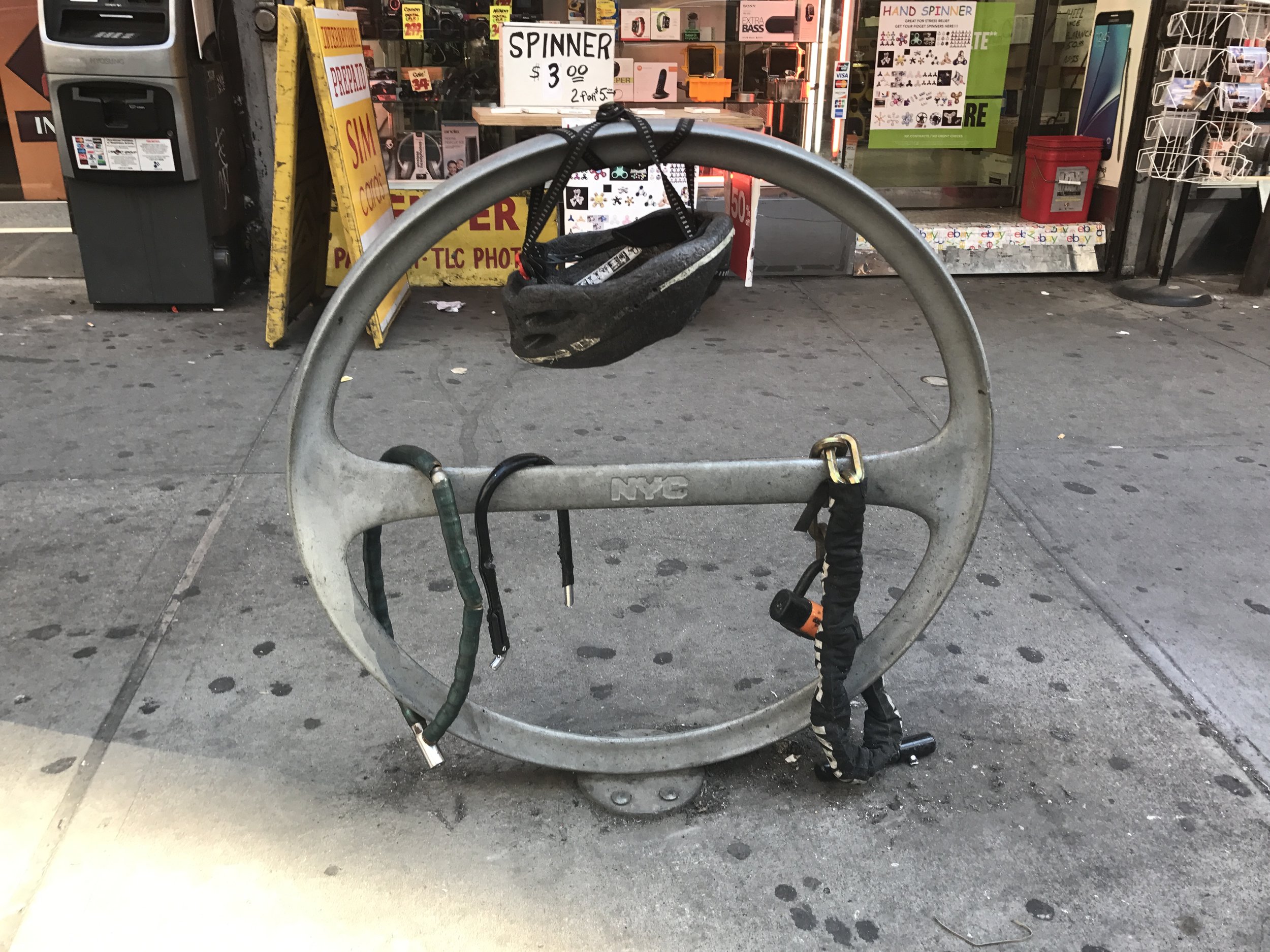 What I really love more than these elegant DOT racks is the ripple effect it had with private property owners, inspiring bank buildings and art galleries alike to get into bespoke bike racks. For the choosy bikers, there’s something for everyone – sleek or artsy, industrial or modern. 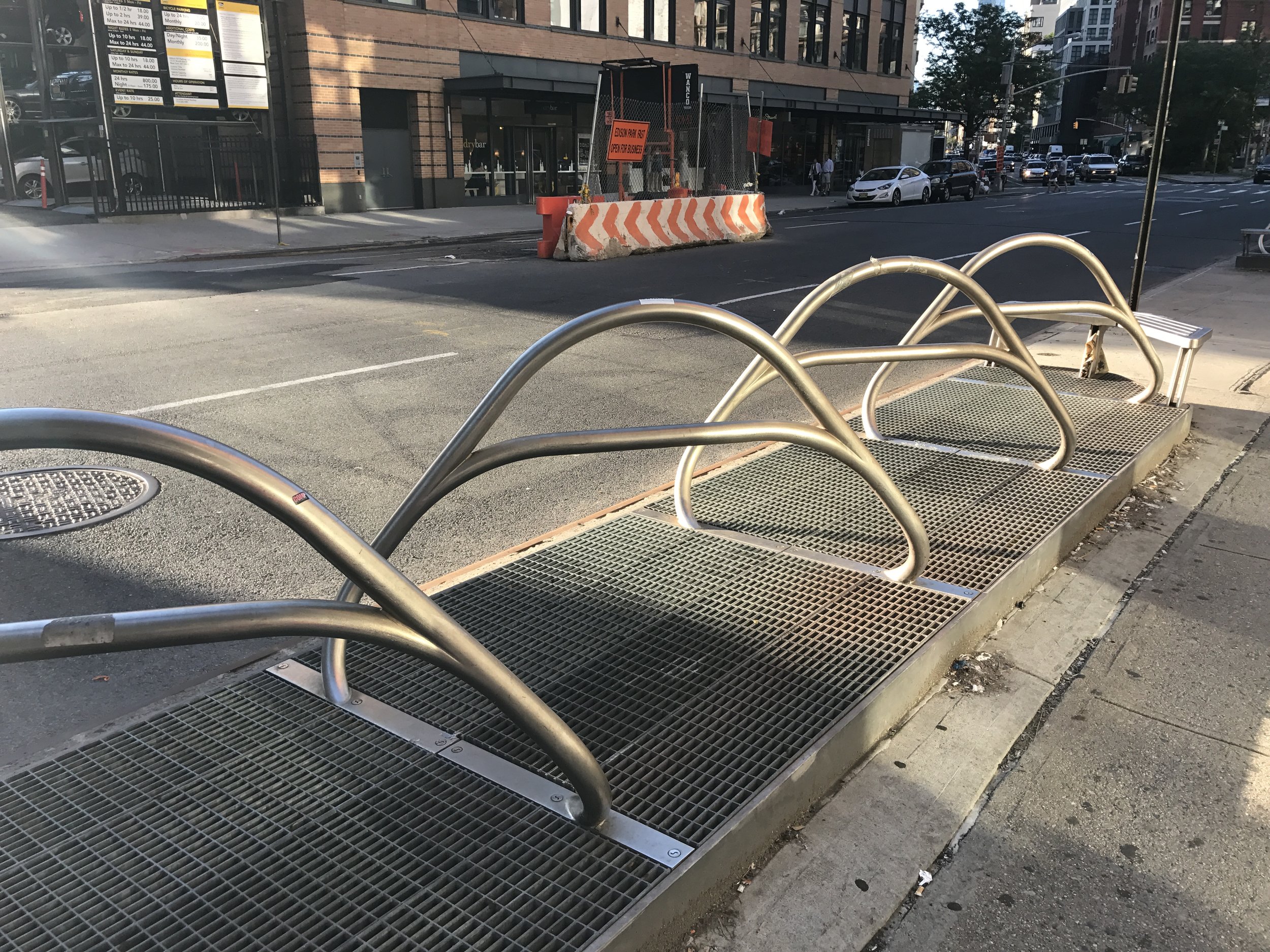 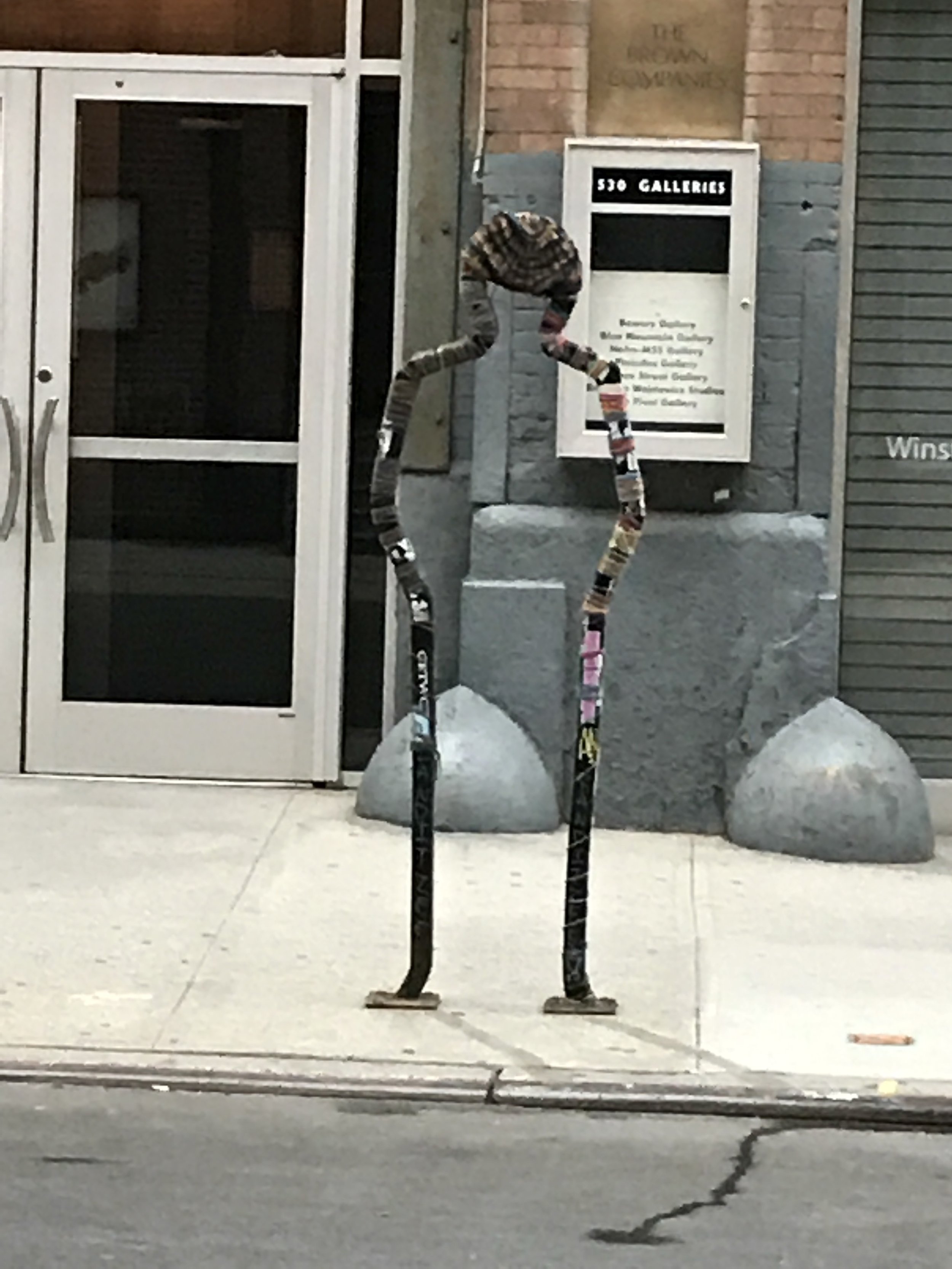 There is a dark side to more cycling, though — with more bikes has come more bike thefts. But as a New Yorker, my inner monologue chimes the classic excuse for everything that is unacceptable in most places, but somehow not here: “That’s New York!” 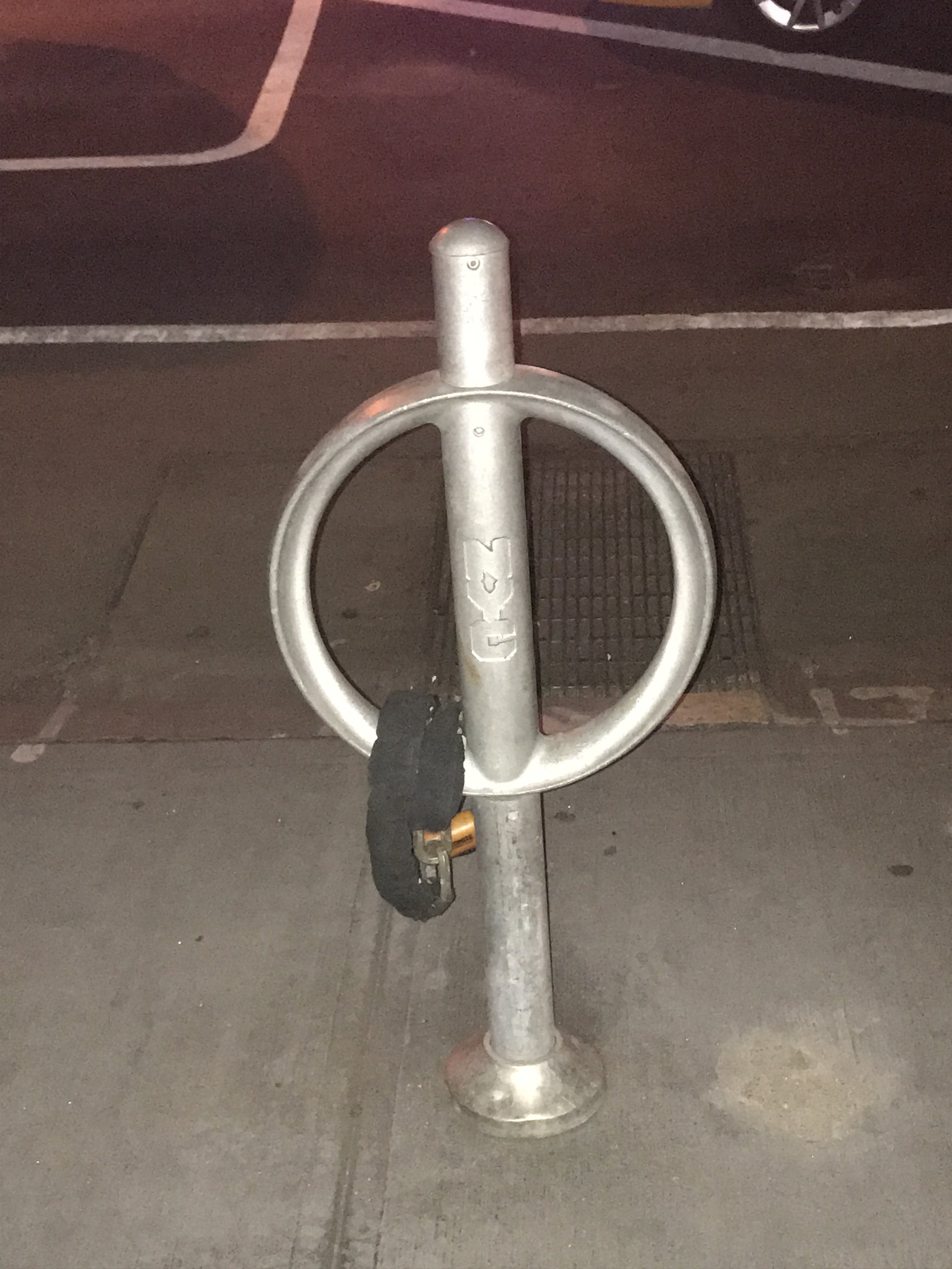 In keeping with the city’s green initiative and the growing public love of the sharing economy, a shared biking system was conceived of in 2011. Here the public had it’s say years before launch, but there was no avoiding first contact with reality. From the word go, capacity was put to the test. Malfunctions were common, with stations going dead and bikes not always docking. New Yorkers told it like it was, and Citi Bike put their game face on. New software was rolled out two years later that fixed the glitches and supported the self-sustaining solar units at each station. And new bike models keep rolling out! I personally love the one with no gear – based on the road’s incline, it naturally adjusts the resistance! I also enjoy the shopping catalogue-esque presentation of the Citi Bike design on the official website. It makes me want to go buy one. But I can only buy a subscription. That will have to do.

Design + data-driven decision making = intelligent design. NYC is making thoughtful decisions that make life in the city more fluid, more perfect, more true to its people. I give my city a gold star.