The article is for all the introverts out there who have risen to a leadership position. Looking at your peers, you may intuitively notice as you look laterally and above you what the data show: 96% of leaders self-report as extroverts. You may be wondering if you can succeed and be effective as a leader, given your personality type. Let’s look at what at the science has to say.

First, can you fake it til you make it?

Your first course of action may be to consider, can I just act like an extrovert until I become one? The science of personality suggests that this would likely be an uphill battle. The Big 5 personality traits (which have more research backing than the Myers-Briggs framework) have been shown to have strong consistency over time, with only moderate changes over many years. The Extroversion/Introversion trait is highly stable; it can vary somewhat over time, but not significantly. So your best bet is to figure out how to play to your own strengths as an introvert.

The research summary that follows re-frames leadership from having “correct and incorrect” styles to “pros and cons” that pair with personality type. There is a way to play to your sweat spots and craft your environment for success.

You may remember the best-selling book Quiet: The Power of Introverts in a World that Can ́t Stop Talking. Authored by Wall Street lawyer turned author, Susan Cain, who took the reader through her seven years of aggregated research on the strengths that introverts wield and the cultural dynamics that they navigate. Adam Grant has recently brought back to the fore some of the key findings on what type of people introverts manage best. Below is a summary of the key points for business leaders to consider. 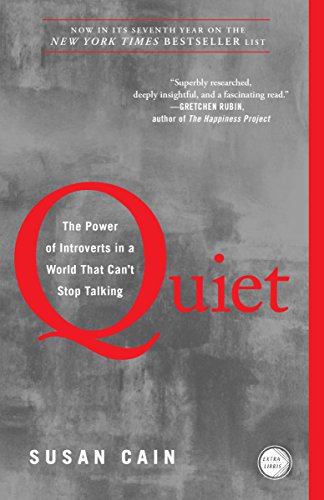 Quiet: The Power of Introverts in a World That Can’t Stop Talking
By Susan Cain

In Index Card Summary style, the three key lessons to keep in mind, and that I walk through below are:

2. Yet the extrovert bias is real and present in corporate America.

3. Effective leaders who are careful to avoid similarity bias will craft environments for each personality type to thrive in.

Cain and Grant both cite introverts as being uniquely good at leading initiative-takers. Their inclination to listen to others and lack of desire to dominate social situations makes introverts more likely to hear and implement suggestions. By encouraging the talents of their teams, they can more easily motivate them to be even more proactive. The challenge for introverts is to manage misguided or less proactive employees.

2. Yet the extrovert bias is real and present in corporate America

As Cain shared with Business Insider, “Extroverts are routinely chosen for leadership positions and introverts are looked over, even though introverts often deliver better outcomes. They’re not perceived as leadership material.” The modern American archetype of a leader is a talkative alpha who is comfortable in the spotlight – the more a person talks, the more attention they receive, and the more powerful they are perceived to be. The result is that introverts are seen as poor leaders by 65% of executive leadership. They also earn ~20% less and manage half as many people as extroverts, according to Truity Psychometrics.

3. Effective leaders who are careful to avoid similarity bias will craft environments for each personality type to thrive in

Adam Grant posits that the dynamism of modern business environments makes proactive employees critical, and introverted leaders tend to encourage and cultivate such employees. The most effective teams are composed of a good mix of introverts and extroverts, and it is highly possible to create a symbiotic environment for both. Leadership can craft and distribute tasks based on people’s natural strengths and temperaments. For example, extroverts can more effectively manage information overload, high pressure, and multi-tasking, while introverts are better at solving complex problems through patience, clarifying, and persistence. Projects and their timelines can be crafted and distributed accordingly.

Being an introvert does not make you a bad leader – in fact there are many strengths you can play to. The challenge is that you won’t be able to learn everything by example from your extroverted peers. Don’t focus on changing your personality – the science says this would be draining and would yield limited results. Your version of successful leadership will activate a more proactive workforce and enable you to tackle long-range problems.

To think of a classic introvert/extrovert duo, Bill Clinton and Al Gore immediately come to mind. One ascended to the presidency for 8 years, carried in part by his charisma. The other was perceived as dry and dispassionate on the campaign trail, but went on to be a pivotal leader in the modern climate change movement. Looking at Cain’s descriptions of personality characteristics, these aren’t surprising outcomes: perhaps Clinton is the action-oriented and rewards-sensitive extrovert, while Gore is the slower and more deliberate introvert, less attracted to wealth and fame. Which is a more effective leader? That, I would argue, is the wrong question.

Reading the op ed of Alina Adams, a mother and wife of African American Stuyvesant High School graduates, I must agree that the debate about the New York Specialized High School Admissions Test (SHSAT) has been improperly framed. As one of the minority Stuyvesant graduates that are the focus of the SHSAT test debate, I agree that shifting the discussion to be about the test rather than the system, and race rather than socioeconomics is a mistake for New York. I say this as someone who almost did not get into Stuyvesant, but whose life was so drastically changed by it.

There are big moments in every lifetime that define who we are as much as the course we take through life. Sitting in that exam room on that sunny fall day was one of those moments. I still well up from time to time when I look back on it and realize just how close I was to a different life, a different, more confined world, a different smaller me.

In 8th grade, a teacher told me that I should take a test for a school in the city called Stuyvesant. I hadn’t heard of it, but I was most definitely off-ramping from private school to public school in 9th grade because it was no longer financially sustainable for my parents. As I mentioned the test to other teachers, and a new friend that was school shopping, the common chorus was that Stuy was a better option than Tottenville, which I vaguely understood was an option, or Curtis, the zoned school which had an abysmal graduation rate.

Finally the test day came. I didn’t know it at the time, but I was woefully unprepared. You see, I hadn’t done any preparation at all. Everyone I asked about the exam had simply told me that math and reading of some sort would be covered. I assumed that the test would match up to what I was already learning in school – why wouldn’t it? The point of school, as I understood it, was to prepare you for whatever comes next. So I sat there, focused, and plowed my way through. I got in, and months later learned that it was only by the skin of my teeth. A classmate shared that the cutoff was around 530 that year, and my score was only 5 points above it. I further learned that most people had actually studied for the test, some for up to 18 months, spending Saturdays and perhaps Sundays memorizing the content of the exam. Looking back on it now, it seems so obvious, but why had no one ever mentioned it? Why did I only learn that Stuyvesant was the 10th best school in the nation once I was there? I still have no answers, and also have no doubts that the same story is playing out today for many others.

My world changed at Stuyvesant. Stressful though it was, I was empowered to be everything I wanted to be and do anything that excited me. The multifaceted stimuli of the people and the place kept me continually on the edge of my own interests and goals. I made friends across the spectrum of wealth, which wasn’t hard to do with a sizable free and reduced lunch qualifying student segment. I never felt poor the way I heard some of my private and boarding school counterparts seemed to. Most importantly, the multitude of student groups made it feel like anything you were interested in, you could do. When surrounded by that attitude everyday, it easily unlocks something within you. For me this manifested itself in my junior year, when I founded a mural that still stands at Chambers St. and the West Side Highway. I planned, socialized, sought and ultimately received support from the Parks Department to create it. Writing about that experience got me into Stanford University, another “yes and” environment full of aspirational dreamers, where support and resources are a given. Another fork in the road, moving me further from the under-resourced neighborhood I grew up in and expanding the people and places to which I was exposed.

Alina writes that if New York grade schools weren’t so terrible, the SHSAT wouldn’t be so hard for so many minority students. That much is clear from my own experience. But awareness of both the test and the preparation opportunities are equally important to gain equity of access. I am grateful for my luck and opportunities. I equally have friends that opted out of Stuyvesant and went to other New York high schools, and they turned out as wonderful humans. But the set of good high school options is entirely too narrow, as AOC recently argued in a town hall. With New York education in the current state it is in, a fork in the road this significant, determined by just a few points, is not nearly enough leeway.

This weekend I had my first baby-puppy meet up with b-school friends. Yes, we’re all in that phase of life ranging from millennial pawent to full fledged parenthood. We chose what seemed like the perfect meeting point: Madison Square Park. It boasts a modern playground and one of the rare small dog parks for the under 20 lb pooches. When the six adults converged we began dancing a fine line. A cluster of us filtered into the playground where the dog wasn’t allowed. Then we switched to the dog park, where the two-year-old was less than thrilled but stoical about being surrounded by animals larger than her. Finally, we all decided it was time to stroll in search of a truly common ground: the outdoor cafe. Yet such spots are somewhat elusive, seasonal, and in high demand at this time of year. At this point I started to realize what parenthood is really about: planning.

I began the search for the ideal map of places that meet all of our familial needs. And here is what I found:

The Dog People, powered by Rover.com, wins my earnest respect for actually pinning their favorite dog-friendly restaurant to a map! While it’s limited to Manhattan, that’s the hardest borough to navigate with a fluffy friend. Bring Fido comes in second for its colorful food photography, although the “New York, New York” tag for every location doesn’t add much.

Time Out New York is certainly guilty of over-indexing on Times Square, but lots of their picks, like Alice’s Tea Cup, are super legit. I personally love their pumpkin scones – which taste like real British scones, with buttery rich moisture. (If you thought you didn’t like scones, you should still try these ones!)

And I made a map of the overlap! Now I know exactly where to go when we have a multi-family, multi-species outing. Happy spring!