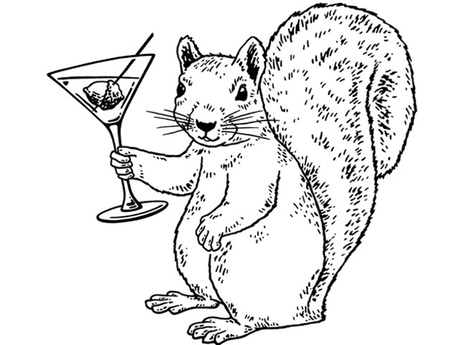 Strolling through the city of Brotherly Love one winter weekend, I marveled at the grand success of a certain invasive species in the city where they were first introduced*. Yes, I’m talking about the grey squirrel. I’ve never seen one cross a street, yet there they are, in every park, perfectly content to play squirrel tag and scout for acorns on what they must think of as “their block”. And yet, as much as they seem to be home bodies, they are in every park in the entirety of the North East. So how did they get everywhere? My theories abounded:

1. They first made it to New York, and if you can make it here, you’ll make it anywhere

2. They traveled what must have been wooded superhighways and, eventually, got paved around

3. They were lured by acorn trails until they posted up in the urban backyards of gentry

Well, none of these guesses seem too far off the mark based on Gizmodo’s historic summary: they were a cute house pet until a few got loose, and people stuffed them fat, so much so that not only did they multiply, but they tumbled out of trees under the gravitational pull of their burgeoning middles. The habit never fully got shaken in some places *cough* Boston Commons *cough*.

Most squirrels are too cagey for direct engagement these days, but still a playful touch to our manicured urban nature encounters.

*Yes, it all started in Philly, which is why all squirrels are Eagles fans.